Loading dyes for DNA agarose gels are traditionally xylene cyanol and bromphenol blue. In a slightly whimsical weekend experiment I tested some food dyes whether they would work as replacements in DIY Bio DNA electrophoresis. These dyes are supposedly non-toxic (which is sometimes debated but without a final verdict yet) and easy to obtain. Thanks to Jelena Aleksic for donations from her Sugarflair food colours box. 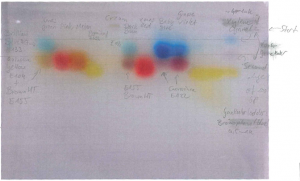 Sugarflair uses simple mixtures of synthetic food dyes and most of them are negatively charged as it turns out. For the picture below I mixed them with some water (the colour mix contain glycerol already) and run them on a 1% agarose gel. My favourite was “Dark Brown”, because it splits up into two colours that run almost like xylene cyanol and bromphenol blue. The colours do not diffuse too much, and are unproblematic on a UV transilluminator.

I used Dark Brown for several routine gels, and while E133/Brilliant Blue FCF is working nicely, E155/BrownHT tends to smear (maybe I’m using too much). Maybe Grape Violet, mixed from E133 and E122/Carmoisine, would be the better choice after all.